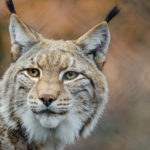 The lynx is a large, feline creature with a pretty and smiling face. Some shamans describe it as a “knowing” smile, and one might compare it with the self-satisfied smile of someone who knows something you don’t.

In some American Indian mystical traditions, the lynx is regarded as the “Keeper of Secrets” and the knower of that which is hidden. So Lynx is associated with the deeper truths and with clairvoyant and divinatory skills.

As a power animal, Lynx can teach you things you don’t know – or have forgotten – about yourself. Lynx is a silent animal and emphasizes the necessity of going into the silence in order to understand “hidden” knowledge and to obtain facets of ancient wisdom.

Watch Lynx’s antics carefully on your journey, for it will rarely, if ever, speak. Watch where it is leading to and from. As you record your impressions, later, consider that thoughts and mental pictures come to mind. They may not appear to have any relevance at first, but this may be Lynx’s way of imparting hidden knowledge to you.

Lynx may lead you to things that are lost or hidden, or to recall a forgotten incident which has relevance to your life now. It may be the whereabouts of a missing object, or a person with whom you have lost contact.

Lynx may encourage you to consult an oracle for advice or to seek some means of divining the future. Secret Service.

It is said that if you want to find out a secret, ask Lynx medicine. Unfortunately, it is difficult to get the silent Lynx to speak. To be confronted by the powerful medicine of Lynx signifies that you do not know something about yourself.

Lynx is the keeper of the secrets of lost magical systems and occult knowledge. Lynx has the ability to move through time an space, and to go into the Great Silence for unraveling any mystery. Lynx is not the guardian of secrets, but the knower of secrets. The problem lies in getting Lynx to instruct you. Lynx would rather be off chasing a bird or kicking sand in your face than running circles around you.

Lynx medicine is a very specific type of clairvoyance. If this medicine is strong in you, you will get mental pictures concerning other people and the exact things they have hidden, either from themselves of from others. You will see their fears, their lies, and the self-deceptions. You will also know where they have hidden the treasures, if there is any. You never speak of these revelations – you simply know.

The only way you can coax information about yourself out of a Lynx medicine person (in case you have forgotten where you hid the treasure) is to respect the practices of his or her tradition. If you go to a Gypsy with Lynx medicine, you show your respect by paying with money after the reading. If you go to a Choctaw medicine person, he or he will reach into your midsection, or use other traditional methods to help you. A blanket or tobacco should be given in exchange for the medicine he or she has performed for you. This operative is known as the law of the Lynx people, and is practiced by Native American, Gypsy, Sufi, and Egyptian cultures, among others.

If Lynx is crossing your life’s path, you can be sure that “secrets” are afloat in your life at this time. If this is your personal medicine, you should listen to your higher self. Be still and pay attention to the revelations you receive either in the form of mental pictures or through a high singing voice in your ear. Perhaps you will receive information in the form of omens. You can be sure that Mother Earth is signaling you in some manner.

If Lynx is at your door, listen. Brother or Sister Lynx can teach you of your personal power and of things you have forgotten about yourself. Lynx can lead you to lost treasures and connect you to forgotten brotherhoods of sisterhoods. Some medicine people believe that the Sphinx of ancient Egypt was not a Lion but a Lynx. This Lynx does not say much. With an enigmatic smile, the great cat watches over the sands of forever.

Be still and silent. Become the one who watches. Honor secret wisdom you hold.