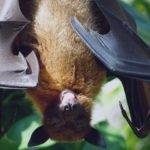 The bat is an animal steeped in mystery, and one which arouses unease in some humans because it is related to darkness and the unknown. Some are afraid of it, perhaps because of its association in horror movies with the supernatural and with ritualistic death.

The bat lives in a cave or a dark place; this is symbolic of the womb, and the animal’s position hanging upside down parallels that of the unborn self, immersed in darkness.   To encounter Bat as a power animal, therefore, signifies the process of initiation – the ending of an old way of life and a rebirthing into a new life pattern. Bat is there to help you to let go of old habits and a previous way of life, and to face a new dawn. You cannot make progress by hanging on tightly to the very things that are holding you back. So, confront your fears head on, and they will flee from you.

Bat is there to help you see in the darkness and to find your way to a new understanding. Face your fears.

Steeped in the mystery of MesoAmerican tribal ritual is the legend of Bat. Akin to the ancient Buddhist belief in reincarnation, in Central America, Bat is the symbol of rebirth.   The Bat has for centuries been a treasured medicine of the Aztec, Toltec, Tolucan, and Mayan people.

Bat embraces the idea of shamanistic death. The ritual death of the healer is steeped in secrets and highly involved initiation rites. Shaman death is the symbolic death of the initiate to the old ways of life and personal identity. The initiation that brings the right to heal and to be called shaman is necessarily precede by ritual death. Most of these rituals are brutally hard on the body, mind, and spirit. In light of today’s standards, it can be very difficult to find a person who can take the abuse and come through it with their balance intact.

The basic idea of ancient initiations was to break down all the former notions of “self” that were held by the shaman-to-be. This could entail brutal tests of physical strength and psychic ability, and having every emotional “button” pushed hard. Taunting and spitting on the initiate was common, and taught him or her to endure the duress with humility and fortitude. The final initiation step was to be buried in the earth for one day and to be reborn without former ego in the morning.

This ritual is very similar to the night of fear practiced by natives of Turtle Island. In this ritual, the shaman-to-be is sent to a certain location to dig his or her grave and spend the night in the womb of Mother Earth totally alone, with the mouth of the grave covered by a blanket. Darkness, and the sounds of animals prowling, quickly confront the initiate with his or her fears.

As the darkness of the grave has its place in this ritual, so does the cave of Bat. Hanging upside-down is a symbol for learning to transpose your former self into a newborn being. This is also the position that babies assume when they enter the world through the womb of woman.

If Bat has appeared in your cards today, it symbolizes the need for a ritualistic death of some way of life that no longer suits your new growth pattern. This can mean a time of letting go of old habits, and of assuming the position in life that prepares you for rebirth, or in some cases initiation. In every case, Bat signals rebirth of some part of yourself of the death of old patterns. If you resist your destiny, it can be a long, drawn out, or painful death. The universe is always asking you to grow and become your future. To do so you must die the shaman’s death.

Be flexible. Prepare for rebirth. The time is now, the power is you