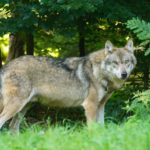 In American Indian cosmology, Wolf is not regarded as a lethal animal but as a teacher and pathfinder – one who leads the way. The Wolf has highly developed senses: its nose, for instance, is a hundred times more sensitive than the human’s. It can sense the difference between real and imagined dangers.

The confrontation of Wolf as a power animal is an indication of being taken to meet your inner Teacher and to receive direct, personal teaching. Wolf will reveal to you that anyone and anything can be a teacher. You can learn from trees, plants, animals, birds, rocks, and stones, and even from the wind and the rain. You just need to be alert and learn to listen.

Wolf thus indicates a coming forth of knowledge that is beneath the level of consciousness and within the unconscious. Be teachable.

Wolf is the pathfinder, the forerunner of new ideas who returns to the clan to teach and share medicine. Wolf takes one make for life and is loyal like Dog. If you were to keep company with Wolves, you would find an enormous sense of family within the pack, as well as a strong individualistic urge. These qualities make Wolf very much like the human race. As humans, we also have an ability to be a part of society and yet still embody our individual dreams and ideas.In the Great Star Nation, Wolf is represented by the Dog Star, Sirius, which legend tells us was the original home of our teachers in ancient times. Sirius was thought to be the home of the gods by the ancient Egyptians, and is still considered so by the Dogan tribe in Africa. It stands to reason that Native American peoples would formulate this same connection and adopt Wolf people as the clan of teachers.

The senses of Wolf are very keen, and the moon is its power ally.   The moon is the symbol of psychic energy, or the unconscious that holds the secrets of knowledge and wisdom. Baying at the moon may be an indication of Wolf’s desire to connect with new ideas, which are just below the surface of consciousness. Wolf medicine empowers the teacher within us all to come forth and aid the children of Earth in understanding the Great Mystery and life.

If Wolf has crossed your life’s path, you may be able to share your personal medicine with others. Your intuitive side may also have an answer or teaching for your personal use at this time. As you feel Wolf coming alive within you, you may wish to share your knowledge by writing or lecturing on information that will help others better understand their uniqueness or path in life. It is in the sharing of great truths that the consciousness of humanity will attain new heights. Wolf could also be telling you to seek out lonely places that will allow you to see your teacher within. In the aloneness of a power place, devoid of other humans, you may find the true you. Look for teachings no matter where you are. Wolf would not come to you unless you requested the appearance of the tribe’s greatest teacher.

Find new paths and options. Break through. Be a role model. Share your inner knowing.