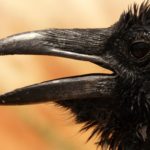 Because of its blackness, Raven has, in western cultures, been considered an omen of ill-fortune and associated with dark deeds. But in American Indian medicine tradition, light comes out of darkness, and black is associated with the Void – the source of all energy – Raven its messenger. That is why it is associated with magic and with fate, for it is a messenger of that which is to come. Raven heralds the need to make dramatic changes in your attitude and in the way you perceive things. Raven is encouraging you to put some real magic into your life – to expect the unexpected, to prepare for plentitude. Disperse that negative attitude that has been holding you back for so long, and replace it with the zest and excitement for “aliveness.” Fell good about being alive.

Raven is the courier of the energy-flow that brings about changes and creates new realities. In American mystical traditions, Raven was the Guardian of Ceremonial Magic and Absent Healing. It therefore represented the power that carried the “message” or intention of the ceremony to its destination, and thus brought about its manifestation. Heralding changes.

Throughout time, Raven has carried the medicine of magi. This has been true in many cultures across the planet. It is sacred, in the medicine way, to honor Raven as the bringer of magic. If the magic is bad medicine, the carrier may be honored out of fear rather than out of respect. Those who fear Raven may do so because they have been dabbling in areas in which they had no knowledge, and a spell may have backfired on them. Rather than analyzing the dark side of sorcery, realize that you will fear Raven only if you need to learn about your inner fears or self-created demons.

Raven magic is a powerful medicine that can give you the courage to enter the darkness of the void, which is the home of all that is not yet in form. The void is called the Great Mystery. Great Mystery existed before all other things came into being. Great Spirit lives inside the void and emerged from the Great Mystery. Raven is the messenger of the void.

If Raven appears in your spread, you are about to experience a change in consciousness. This may involve walking inside the Great Mystery on another path at the edge of time. It would portend a signal brought by the Raven that says, “You have earned the right to see and experience a little more of life’s magic.” Raven’s color is the color of the void – the black hole in space that holds all the energy of the creative source.

In Native teachings the color black means many things, but it does not mean evil. Black can mean the seeking of answers, the void, or the road of the spiritual or nonphysical. The blue-black of Raven contains an iridescence that speaks of the magic of darkness, and a changeability of form and shape that brings an awakening in the process.

Raven is the guardian of ceremonial magic and in absentia healing. In any healing circle, Raven is present. Raven guides the magic of healing and the change in consciousness that will bring about a new reality and dispel “dis-ease” or illness. Raven brings in the new state of wellness from the Void of Great Mystery and the field of plenty.

Raven is the messenger that carries all energy flows of ceremonial magic between the ceremony, itself and the intended destination. For instance, if a ceremony is being performed to send energy to a disaster area where people need courage and strength, Raven would be the courier for that energy flow. The intention could be to allow the people of the devastated area to feel the concern and support of the participants in the ceremony.

If you have chosen Raven, magic is in the air.   Do not try to figure it out; you cannot. It is the power of the unknown at work, and something special is about to happen. The deeper mystery, however, is how you will respond to the sparkling synchronicity of this alchemical moment. Will you recognize it and use if to further enhance your growth? can you accept it as a gift from the Great Spirit? Or will you limit the power of the Great Mystery by explaining it away?

It may be time to call Raven as a courier to carry an intention, some healing energy, a thought, or a message. Raven is the patron of smoke signals or spirit messages represented by smoke. So if you want to send a message to the Blue Road of spirit, in order to contact the Ancients, call Raven. Or, who knows, the Ancients may be calling to you. Remember, this magic moment came from the void of darkness, and the challenge is to bring it to light. In doing so, you will have honored the magician within.

Open yourself to miracles. Use new eyes. Believe in magic. Embrace life’s wonders.