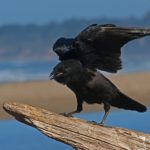 The shamanic ability to be “Shape shifters” – to perform magical acts of bringing about desired changes in accordance with the will – was sometimes referred to by the Indians as “Crow Medicine,” for Crow helps to change/shape the future.

Crow, as a power animal, is urging you to let the past be your teacher. You cannot change it, but you can look into it and recognize t hose beliefs that have caused you suffering, so that you can now discard them. The present is the only true reality, for it is in the Now that the Future is created and fashioned. Change your thoughts and you change your future. Crow urges you to make more effective use of the present moment, and let the future be an inspiration.

Crow also signifies the need to find proper balance between ideals and practical reality, and reveals the ability to create the kind of future you want – if you apply your will to it. Shaping the future.

There is a medicine story that tells of Crow’s fascination with her own shadow. She kept looking at it, scratching it, pecking at it, until her shadow woke up and became alive. Then Crow’s shadow ate her. Crow is Dead Crow now.

Dead Crow is the Left-Handed Guarding. If you look deeply into Crow’s eye, you will have found the gateway to the supernatural. Crow knows the unknowable mysteries of creation and is the keeper of all sacred law.

Since Crow is the keeper of sacred law, Crow can bend the laws of the physical universe and “shape shift.” This ability is rare and unique. Few adepts exist in today’s world, and fewer still have mastered Crow’s art of shape shifting. This art includes doubling, or being in two places at one time consciously; taking on another physical form, and becoming the “fly on the wall” to observe what is happening far away.

The Europeans that came to Turtle Island were named the “boat people” by Slow Turtle. Even with the knowledge of alchemy possessed by certain boat people, none had ever seen the powerful shape shifting of shamans who utilized Crow medicine. Many boat people were frightened by what appeared to be animals coming into their camps or dwellings to discern their medicine. Crow medicine people are masters of illusion.

All sacred texts are under the protection of Crow. Creator’s Book of Laws or Book of Seals is bound in Crow feathers. Crow feathers tell of spirit made flesh. Crow is also the protector of the “ogallah” or ancient records.

The Sacred Law Belts, or Wampum Belts, beaded by native women long before the boat people or Europeans came to this continent, contain knowledge of the Great Spirit’s laws, and are kept in the Black Lodges, the lodges of women. The law which states that “all things are born of women,” is signified by Crow.

Children are taught to behave according to the rules of a particular culture. Most orthodox religious systems create a mandate concerning acceptable behavior within the context of worldly affairs. Do this and so, and you will go to heaven.   Do thus and so, and you will go to hell. Different formulas for salvation are demanded by each “true faith.”Human law is not the same as Sacred Law.   More so than any other medicine, Crow sees that the physical world and even the spiritual world, as humanity interprets them, are an illusion. There are billions of world.   There are an infinitude of creatures. Great Spirit is with all. If an individual obeys Crow’s perfect laws as given by the Creator, then at death, he or she dies a Good Medicine death – going on to the next incarnation with a clear memory of his or her past.

Crow is an omen of change. Crow lives in the void and has no sense of time. The Ancient Chiefs tell us that Crow sees simultaneously the three fates – past, present, and future. Crow merges light and darkness, seeing both inner and outer reality.

If Crow medicine appears in your card spread, you must pause and reflect on how you see the laws of the Great Spirit in relation to the laws of humanity. Crow medicine signifies a firsthand knowledge of a higher order of right and wrong than that indicated by the laws created in human culture. With Crow medicine, you speak in a powerful voice when addressing issues that for you seem out of harmony, out of balance, out of whack, or unjust. Remember that Crow looks at the world with first one eye, and then the other cross-eyed. In the Mayan culture, cross-eyeds had the privilege and duty of looking into the future. You must put aside your fear of being a voice in the wilderness and “caw” the shots as you see them.

As you learn to allow your personal integrity to be your guide, your sense of feeling alone will vanish. Your personal will can then emerge so that you will stand in your truth. The prime path of true Crow people says to be mindful of your opinions and actions. Be willing to walk your talk, speak your truth, know your life’s mission, and balance past, present, and future in the now. Shape shift that old reality and become your future self. Allow the bending of physical laws to aid in creating the shape shifted world of peace.

Focus on the positive. Detach from negativity. See opportunities in every challenge.