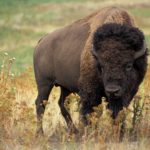 The Buffalo was the most sacred of all animals to the American Indian because it gave entirely of itself providing not only food, but also materials for clothing, housing, cooking utensils and equipment, and weapons. As a power animal, Buffalo is thus concerned with provision and abundance, with sustenance and sharing. It stresses the importance of being prepared to share one’s energies with others, and to recognize other people’s needs.

Buffalo is also symbolic of Wanka-Tanka – the Great Spirit in manifestation, who was also referred to as the Great Everything – and is a reminder that whatever talents and abilities we may have they all derive from the source of the Great Provider. So Buffalo as a power animal serves as a reminder that everything we possess is but temporary, and that true happiness can never be attained alone; it comes through sharing what one has, and what one is, with others. Sharing and caring.

In the Lakota tradition it was the White Buffalo Calf Woman who brought the sacred pipe to the people and taught them to pray. The bowl of the pipe was the receptacle that held tobacco, an herb with male and female medicine. The seeding of life. In the coming together of male and female, the connection to the divine energy of the Great Spirit was made. As the pipe was loaded with Tobacco, every family in nature was asked to enter into the pipe and share its medicine as prayer and praise to the heavens. The smoke was considered to be visual prayer, and was very sacred and cleansing.

Buffalo was the major source of sustenance for the Plains Indians. It gave meant for food, hides for clothing, warm and soft robes for long winters, and hooves for glue. The medicine of Buffalo is prayer, gratitude and praise for that which has been received. Buffalo medicine is also knowing that abundance is present when all relations are honored as sacred, and when gratitude is expressed to every living part of creation.

Because of its desire to give the gifts that its body provided, and because of its willingness to be used on Earth for the highest good before entering the hunting grounds of Spirit, Buffalo did not readily stampede and run from hunters.

To use Buffalo medicine is to smoke the pipe in a sacred manner, and to give praise for the richness of life to be shared with all races, all creatures, all nations, and all life. It means smoking for others to that their needs are met, praying for the good of all things in harmony, and accepting the Great Mystery as part of that harmony.

If you have drawn the Buffalo card, you may be asked to use your energy in prayer. You may also be called upon to be an instrument of someone else’s answer to a prayer. this could portend a time of recognizing the sacredness of every walk of life, albeit different from your own. To honor another’s pathway, even if it brings you a sadness, is a part of the message that Buffalo brings. This may be a time of reconnection to the meaning of life and the value of peace. Most assuredly this time will bring serenity amidst chaos if you pray in earnest for enlightenment and the power of calmness and give praise for the gifts you already have.

Buffalo medicine is a sign that you achieve nothing without the aid of the Great Spirit and that you must be humble enough for that assistance and then be grateful for what you receive.

Make way for abundance. Release fear of lack or scarcity. Open yourself to receive.